When I was offered the opportunity to review Geode Nocturnal I was really keen for several reasons; Firespiral Slings is one of my favourite wrap brands, Geode is the first release of a new design and it is a double weave, something that I’ve not tried before – exciting stuff! Geode Nocturnal is 100% cotton and 315gsm.

A little about the brand first, taken from their website: “Firespiral Slings woven baby wraps are designed and woven in the UK. Our designs are inspired by the universal patterns in nature that stray into both science and myth; the magical way in which we are connected to the world and its rhythms.”

Geode is a new design that was first seen at Winter Wovenland in November and will be released in two colourways in December. When I heard there was going to be a new design I was really excited, but I have to be honest and say that after seeing the photos and videos from Winter Wovenland I wasn’t sure it was for me at all. But Geode is a design that grows on you the more you look at it; I soon realised that it has many beautiful elements and like a lot of the Firespiral designs there is much more to it than meets the eye. If you are unsure about the design I would encourage you to take another look – there is real beauty in it and it is striking in its complex simplicity!

Geode, as mentioned, is a double weave wrap and the first to be released by Firespiral. Double weave uses two wefts that are woven to encompass the warp creating a weft-warp-weft-sandwich.

What does that mean for the way the wrap looks? Well, with Geode Nocturnal you can clearly see the difference in the two wefts; one is a zesty green and the other a slate grey-blue-lilac. The purple warp is mostly hidden by these two wefts but if you look carefully you can see it peeking through in places.

More importantly, perhaps, what does it mean for the wrapping qualities and the feel of the wrap? Geode felt very different to what I expected; it still felt like a Firespiral to me, somehow different to cotton wraps I’ve tried from other brands, but it doesn’t feel like the Alchemy weave I’m used to. The weave is tighter yet it retains the Firespiral softness, but more in the way you get from your favourite pair of jeans than the kitten belly fluff of their other cotton wraps.

It didn’t feel as thick as I might have expected for it’s 315gsm, but it did feel dense and heavy. It also has surprising amount of diagonal stretch which I wonder if is related to the repeating hexagonal design or the double weave itself. I would normally use the word bandagey to describe a wrap with that much stretch, but being such a heavyweight I’m not sure bandagey applies!

I gave Geode a good work out today wrapping my 18 month old and my 4.5 year old around Center Parcs. My eldest was up first; I carried her for about half an hour in a double hammock and I was really impressed. At 22kg I tend to favour thicker woollies for Big E because of the cush on my shoulders and the grip. I wasn’t sure how Geode would perform here but I wasn’t disappointed; the density of the wrap was easy on the shoulders and the carry was rock solid with no sagging or slipping. 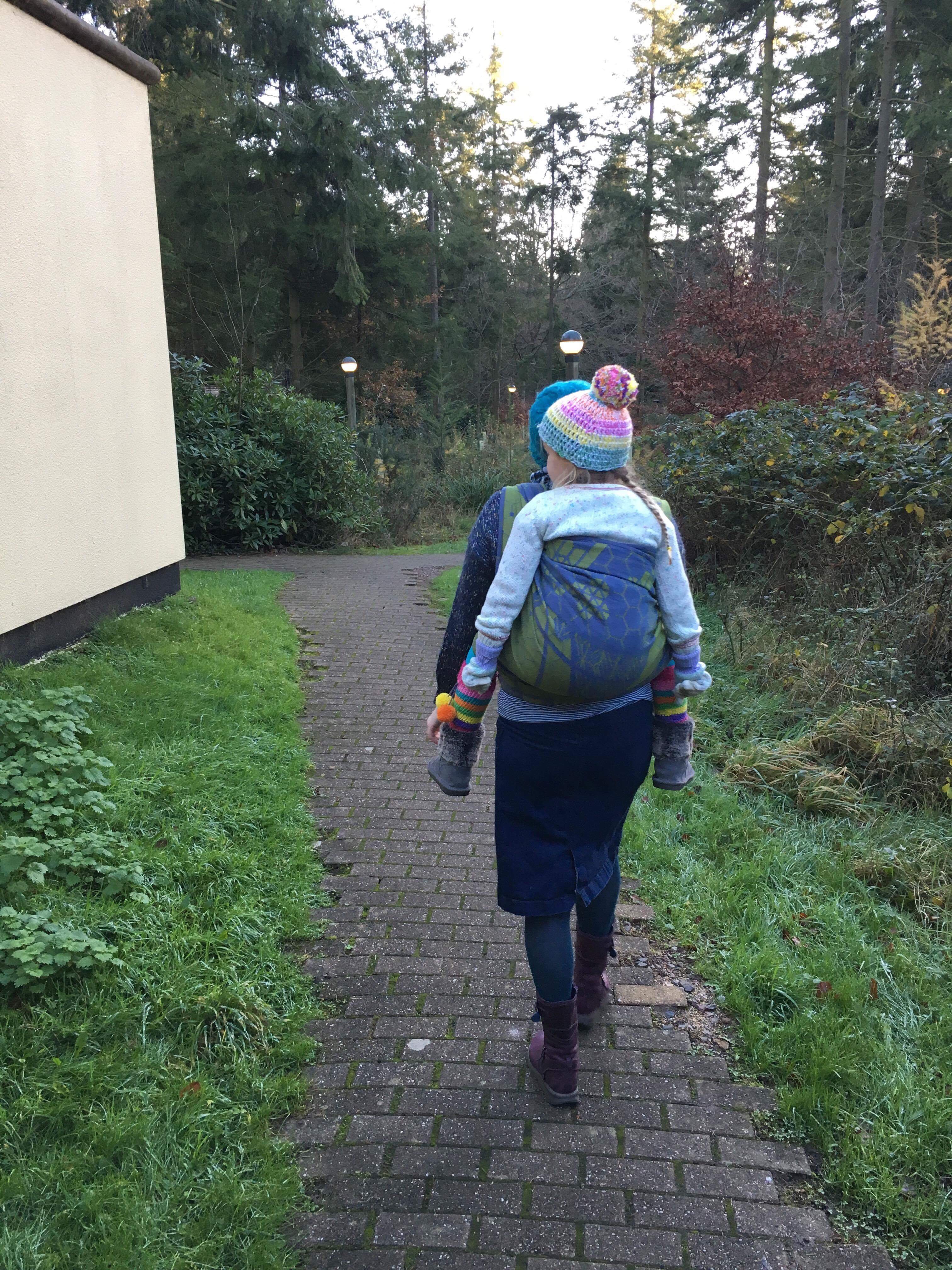 Next up with Little E I went for a Double Hammock Freshwater Finish Tied Under Bum; whilst the carry was comfortable it did need some adjustment to work out the stretch and slack and I found tying it off quite tricky, I felt this was in part related to the density of the wrap (and in part to do with me not being good at TUB!) but that this would also get easier as it broke in and I became familiar with the wrap’s character. 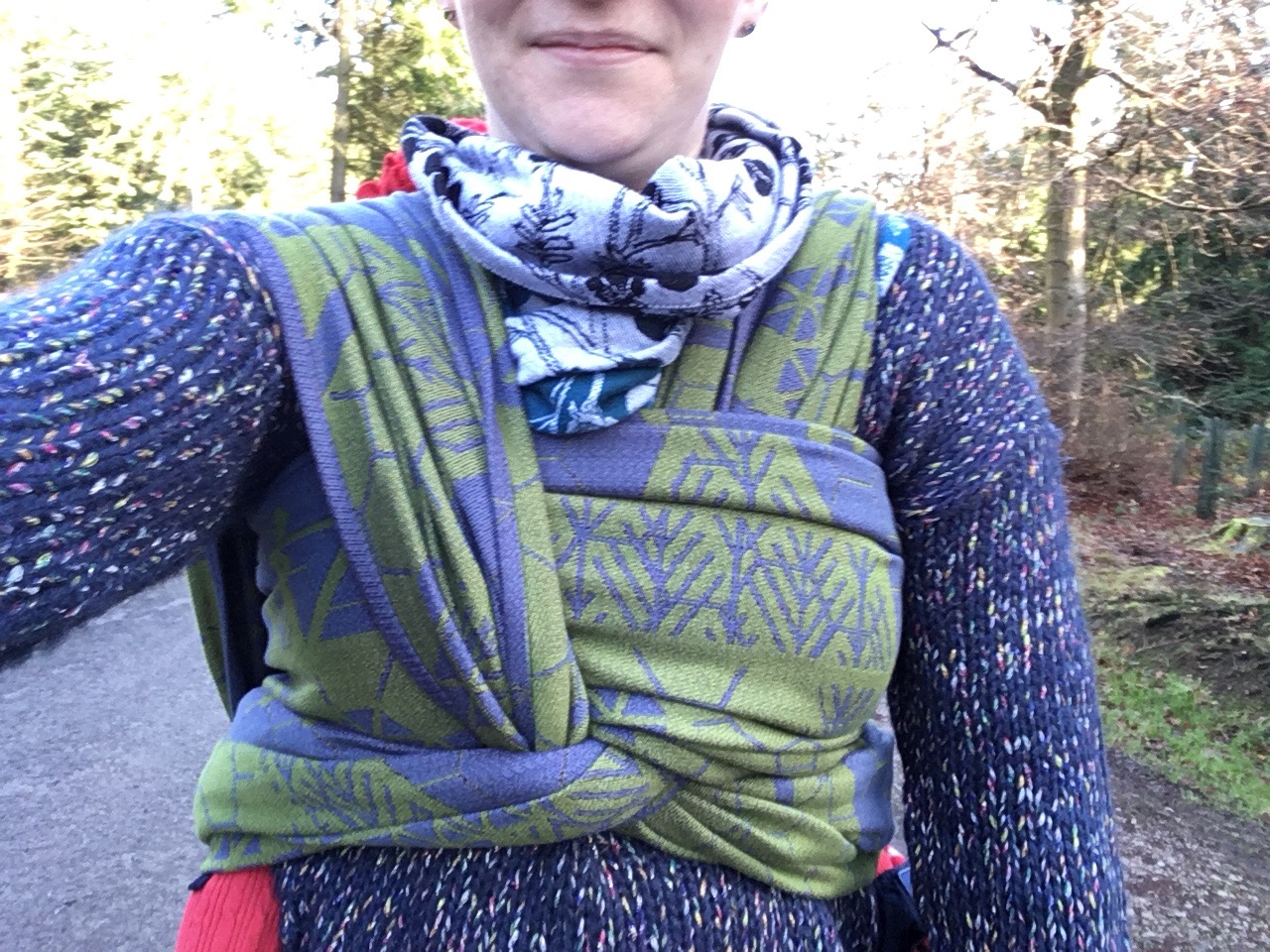 I finished up with a Front Double Hammock which had the sleepy dust needed to get an overly tired Little E to nap. Again it was very comfortable, but again it needed a little adjustment to ease the slack out, however once is place it was solid and supportive.

Overall I have been impressed with Geode, pleasantly surprised even! It was perfect for carrying Big E and as you may have seen in the video I posted previously she really liked it too! It was also great with Little E, though needed more work to get a good wrap job. Personally it wouldn’t be my first choice for a small baby or inexperienced wrapper due to the weight and density of it, I would favour one of the kitten belly soft cotton wraps Firespiral are known for, but for a bigger baby or toddler it would be brilliant, and it is one of the best big kid wraps I’ve tried! I have really enjoyed using this as a base size wrap, not my usual choice, but imagine it would also work well in a short or midlength wrap. 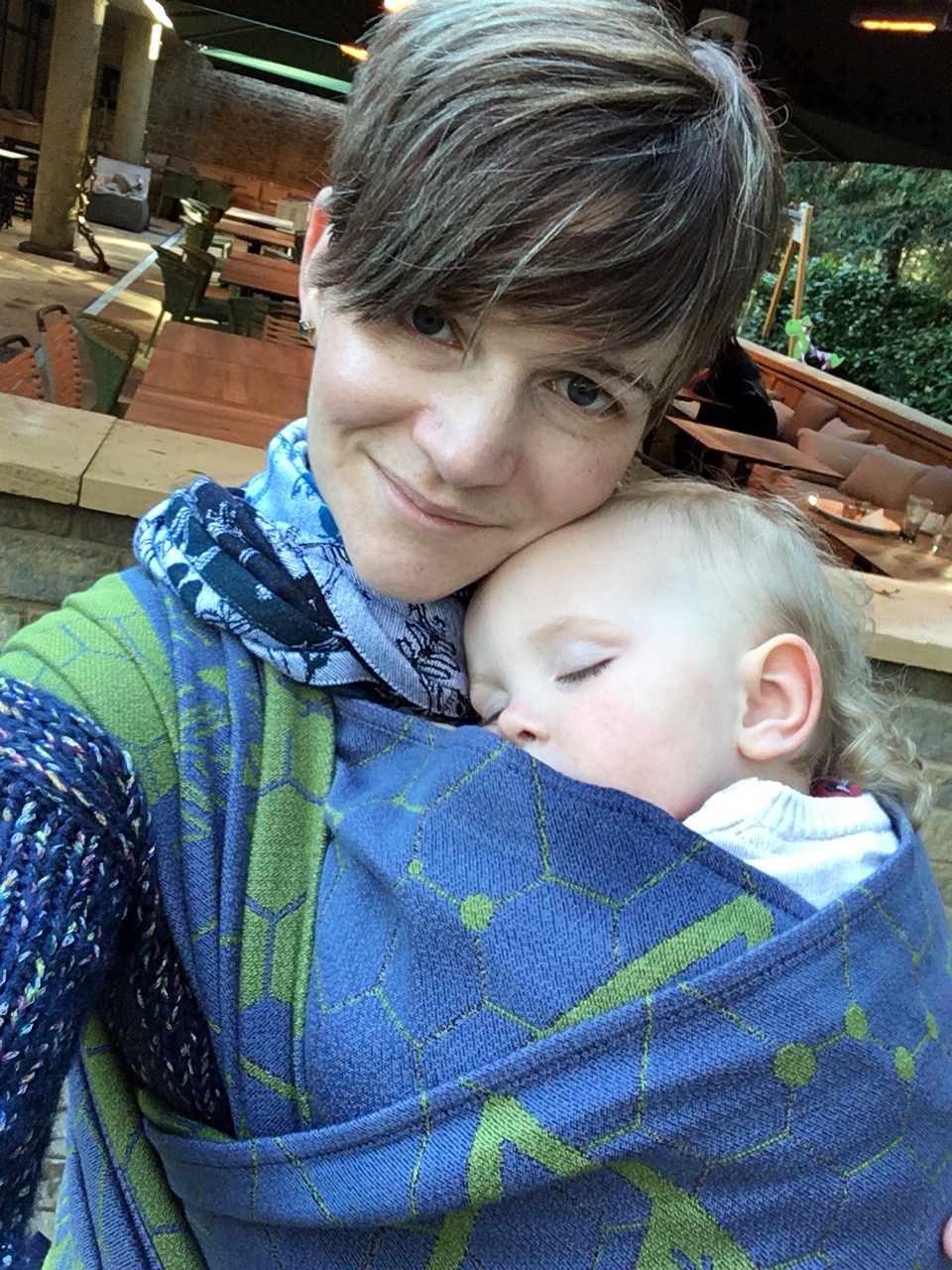 Geode Nocturnal and its sibling Geode Diurnal are being released on the 8th of December alongside some other beautiful wraps. For more information visit http://www.firespiralslings.co.uk and check out the release calendar and blog.

Thank you to Firespiral Slings for sending me Geode Nocturnal to review.

Welcome to my blog All Wrapped Up – An Adventure in Babywearing. I’m a busy Mum with two daughts and I love to babywear. This is my space to share my adventure, my learning and also post wrap reviews. I hope you find it interesting. It’s still under development as I get to grips with WordPress so forgive it not being very pretty or well designed yet!